For your convenience: Woodenbong offers 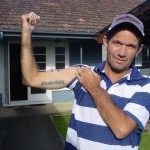 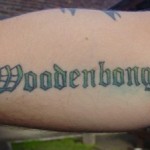 The Woodenbong region showcases a unique natural environment with remnants of activity associated with the Focal Peak Volcano, active 24 million years ago.
The MacPherson Range boasts Mount Barney and the complex of surrounding peaks which are the underground roots of this large shield volcano. Mount Gillies, Mount Lindesay and Mount Glennie represent lavas erupted from the volcano. The prominent cliffs of Mount Lindesay, and of Mount Glennie are remnants of horizontal rhyolite lava which have subsequently been isolated by erosion. The Githabul Aboriginal people are the original inhabitants of the area and much of their cultural legacy remain today and the language is being taught in the local school. The first European record of the MacPherson Ranges was by Logan, Fraser and Cunningham, who saw the rugged mountainous area from Mount Barney’s peak in 1828. Francis Roberts, a surveyor marking the border between New South Wales and Queensland, and his assistant Isaiah Rowland, were the first Europeans to traverse the area. Woodenbong, officially declared a village in 1908 is rich in natural and cultural history and is located in the shadow of Mt Lindesay standing proudly at 1280 metres above sea level in the MacPherson Ranges/Border Ranges of Northern NSW, 10 km south of the NSW/Queensland state border. It is situated at the north western border of the Kyogle Local Government Area at the edge of the Tenterfield Shire.  Woodenbong is 59 km from Kyogle and 143 km from Brisbane or the Gold Coast.
On a map Woodenbong looks like it is isolated, but in reality it is reasonably close to several major centres, including shopping and agricultural links to Warwick, Killarney and Beaudesert.
The area used timber as its main source of employment in the early years and dairy, cattle and crops soon followed. Since then the village has seen many changes and is now a delightfully hospitable place to reside and visit. Modern times attract many bike riders, both road and trail bike riders, firstly due to the inspiring  mountain roads to travel and welcoming hospitality and secondly the signature event of the Australian Dirt Bike Adventures being held twice a year in Woodenbong over the past several years.

In the 2006 Census the population count was 332 in the village and total area count was approaching 650 (although in 2014 estimated at 500) and is rich in natural and cultural history. Woodenbong is a peaceful village that has always had a strong sense of community and pride.
With its country charm and many local businesses, services and a large number of community groups which more than cater for the local residents.
Education ranks highly with an excellent central school from K to year 12 that offers a high standard of education, particularly in agriculture and IT, a Pre-School.
Woodenbong has very close ties with the nearby village of Urbenville and the local Muli Muli Aboriginal Community.
The communities have strong links due to their location and proximity and shared community interests, for example the high school is located in Woodenbong and the hospital is located in Urbenville.
Urbenville is situated 13 km south of Woodenbong mostly in the Tenterfield Shire and Muli Muli is situated midway between the villages approximately 6km south of Woodenbong in the Kyogle LGA.
The village is situated in a very picturesque area nestled among mountain peaks and valleys and surrounded by World Heritage rainforests and State Forest’s the area is not short of breathtaking views and scenery. These include the Border Ranges National Park, Koreelah National Park, Toonumbar National Park and Mount Warning National Park in NSW.  They are also accessible to the Lamington National Park, Mount Barney National Park and Springbrook National Park in Queensland. The main link from the North-East at Rathdowney Qld on the Mt Lindesay Highway is the access to Queen Mary Falls, and associated waterfalls at Killarney, Qld, 50km North-West of Woodenbong, known as the Scenic Rim.
The surrounding World Heritage rainforests are the home to many species of birds and fauna and are reputed to be the home of the Yowie although sightings of these shy and gentle creatures are rare numerous have been reported over many years.
Woodenbong is your last chance to stop and stretch before beginning the climb over the “Scenic Rim”. 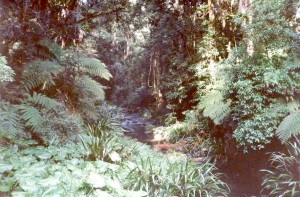 Yowies in the Hills? Story by Rosemary Clark http://www.cleanandgreen.com.au

Anyone who sees a Yowie will talk in whispers to his closest friends but if anybody should ask him about the sighting – he will deny it. 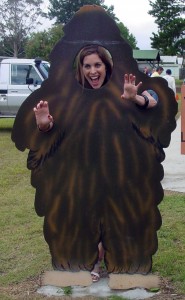 Since the 1890’s Yowie sightings have been a regular occurrence in the Upper Clarence Region of Northern NSW, if we are to believed local folklore.
Two sightings in the 1970’s caused much media speculation and scientific teams attempted to investigate the reports, but unfortunately the women who reported the sightings were subjected to ridicule and no further sightings have been officially reported.
The most recent alleged sighting was at the end of November 2001, very early in the morning when two women went out to check on a mare due to give birth. Low cloud hung over the escarpment and the light was poor. The two women saw what appeared to be an ape like creature, about six feet tall and covered in dark hair.

When the second woman arrived back with a camera they went to the place where the creature was last seen, but it had disappeared. They drove back to the house, thinking that nobody would believe them.

When they rang their neighbors they were told to “just shut up about it, don’t say anything, it will only cause trouble” the women were confronted with this attitude from every person they asked.

Another sighting on the same section of mountain range just twelve months earlier caused a similar reaction, the woman involved in that sighting rang a friend to tell what she had seen, the friend told her to pull herself together or take a holiday.

Many timber workers tell of sightings in the same region over recent years, one was in the River Tree area about ten years ago when a truck driver had a close-up look at a Yowie. That sighting lasted for about five minutes and the creature was within twenty meters of the timber rig.

Hoaxes and practical jokes would explain some of the sightings but scientific research into the sightings has been hampered by the reluctance of people to report sightings. Whispers have it that the last sighting was on a farm in 2003. 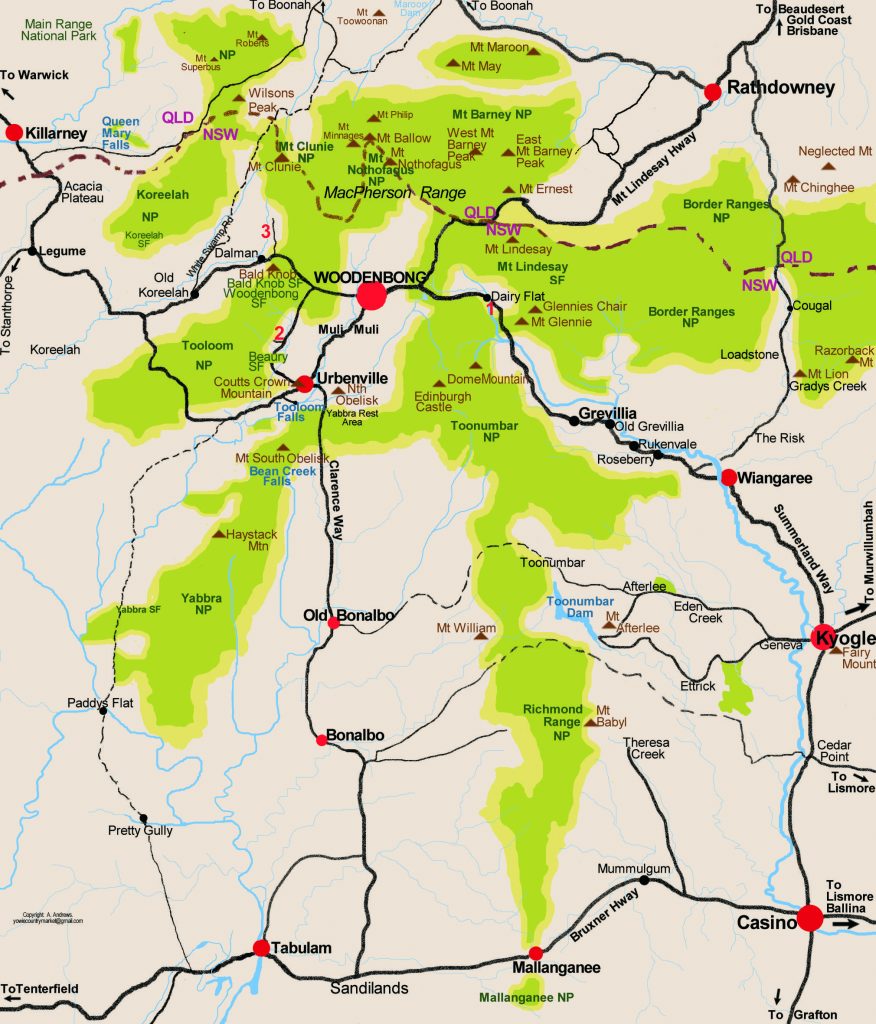 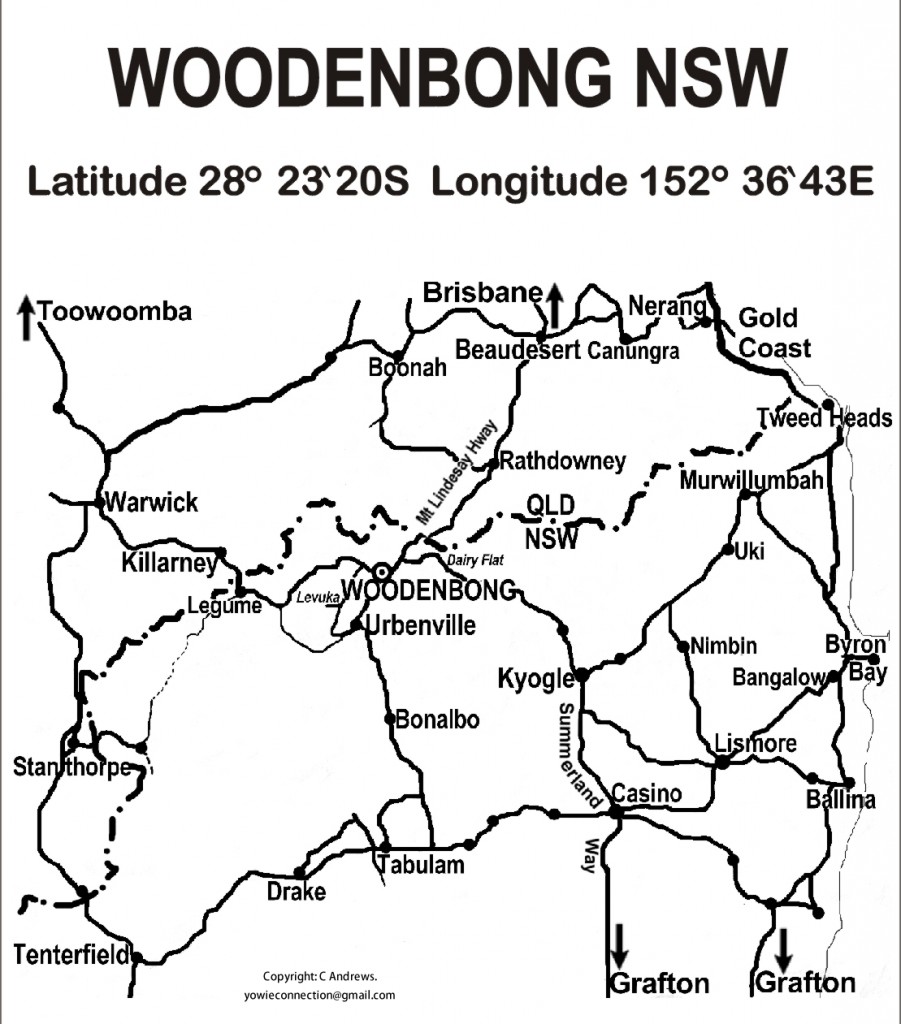 Woodenbong Progress Association and Woodenbong community members have made every attempt to ensure that all details included on this website at the time of its creation are accurate. Over time, details may change and events may have to be cancelled or postponed due to weather or unforseeable conditions. The WPA takes no responsibility for incorrect dates or information. If you want information about a business or event, then it is suggested that you contact them directly.